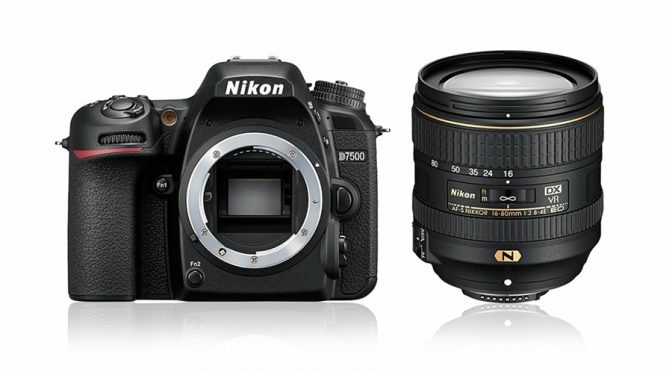 The Nikon D7500 is the fourth DSLR camera in Nikon’s D7xxx series and represents the greatest revamp we have ever seen in the series since the D7000 replaced the old D90. The D7500 delivers the ISO range, game-changing resolution, energy efficiency, and image processing of the magnificent D500 in an enthusiast level DLSR. The D7500 camera is built to outperform all the other cameras in its class with its top-tier image quality, flawless autofocus, blazing speed, pro-grade creative tools, and 4K Ultra HD video- all in a rugged, comfortable design. The Nikon D700 is built for the new generation of creators and people who love adventure.

The Nikon D7500 uses a 20.9 Megapixel image sensor and an EXPEED 5 image processing engine to capture images with phenomenal tonality and sharpness, especially in low light situations like parties, concerts, or sporting events.

The camera allows you to capture 8 frames per second when shooting continuously. A powerful focusing system can lock onto objects fast, allowing you to take clear pictures of moving objects and people.

The D7500 uses a 180,000-pixel RGB sensor to detect a human face and improve performance during high-speed shooting.

The tilting touchscreen is one of the more notable differences between the D7500 and previous models. The large 3.2-inch touchscreen can tilt up or down, allowing you to shoot at high and low and less comfortably. The touchscreen makes it easier to control the camera and interact with the pictures you’ve taken.

The Nikon D7500 has a Monocoque design and weather sealing to withstand dust, moisture, and heavy use.

A lot of people agreethattheD7500 feels better in the hands than previous D7xxx models. Deeper grip and slimmer ergonomics have improved comfort for all-day shooting and stability for handheld shooting.

Nikon engineers have really outdone themselves with the D7500 when it comes to energy efficiency. The D7500 can capture approximately 950 pictures on a single battery. This is enough for shooting at concerts, sporting events, wildlife shooting and others that take time.

For those looking to enter the world of filmmaking, the Nikon D7500is the perfect DSLR for thejob.it can record rich and extremely detailed 4K full HD videos for up to 30 minutes through the industry-leading NIKKOR lenses.

The D7500 body is fairly substantial and comes packed with many controls and function buttons. The menu is extensive and logical, making it easy to set it up and tweak a few things if needed.

The Nikon D7500 is heavier than most mirrorless models available today, but its solid feel and strong grip give it a well-balanced feel. If you like buttons, on-body controls, and dials, you’ll love the D7500.there are four buttons on the right and seven buttons on the left back, along with a command dial and cursor field control. The mode dial has 10 indents on top and 7 drive modes.

The weight, feel of build, and balance of the Nikon D7500 is really good, unlike most lower-priced DSLRs which look like they are made of plastic. The controls and grip are classic, offering the user a sense of control over all parameters and options available. The D7500 can be summed up as a conglomeration of pro camera models and amateur models that leans more on the enthusiast side.