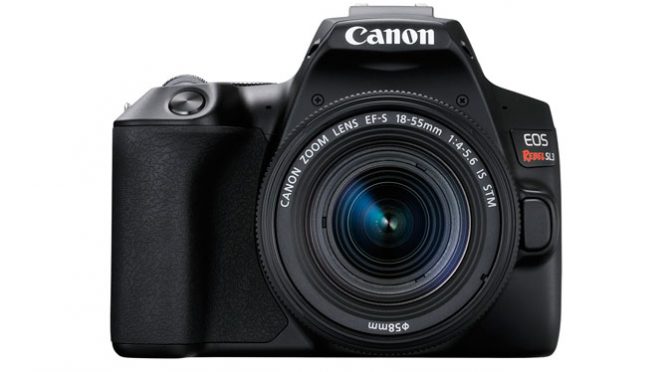 The Canon EOS Rebel SL3 is a recent entry in the world of DSLR cameras, one that aims to dominate the budget-friendly spectrum of the Canon line of DSLRs. Currently, it might not be the cheapest camera of the budget category, but it has a wide array of interesting features that can make up for the extra cost, depending always on the needs of the photographer. In many ways, it can be considered as a further refinement of the already successful Canon EOS Rebel SL2, as it builds up on the exact same features and has a few more interesting additions. That being said, there is not a huge leap in terms of technology, following the recent Canon mentality which aims more on refining than on experimenting with the camera designs offered.

Canon EOS Rebel SL3 uses a 24.1MP APS-C CMOS sensor with a maximum image size of 6000 x 4000 pixels and an ISO sensitivity which ranges from 100 to 25,600 (51,200 expanded) and uses the latest DIGIC 8 processor. These specifications are almost identical compared to the previous DSLRs of the company, with the exception of the upgraded processor which does not make a visible difference in photography, but it does affect the video capabilities of this camera. What is really unique about Canon EOS Rebel SL3 compared to the previous budget oriented DSLR cameras is that this model has a 4k video capability (at 25fps) and higher maximum bitrates, mostly due to the upgraded internal processor. Due to this feature and its relatively low-cost, it can be a perfect camera for someone who begins vlogging and wants to have a camera with decent 4k capabilities, without the cost that most 4k capable cameras have. Sadly, the camera has only 9 AF points, a number which can be sufficient for most occasions, but an upgrade in this feature could also be a meaningful one, which would be perfectly paired with elevated video characteristics.

As a camera, it has the distinctive design which is shared between most of the entry-level canon cameras, being solid and robust, while at the same time being extremely small and light-weight for a DSLR camera, more so than most of the others in this category. It is even (slightly) lighter than its SL2 predecessor, despite having the exact same dimensions, meaning that the company invests in a gradual refinement of the ergonomics of the camera. It is a camera body which has the common EF Lens mount, ensuring a huge array of available lenses that can cover any need and any possible budget. Ergonomics are generally very good, especially for those that might struggle both with bigger DSLRs or with those that might have problems handling the even smaller mirrorless cameras. Canon EOS SL3 sits exactly in the middle between these two worlds, being able to satisfy most people due to its versatility. At the same time, it is important to note that it has an articulating screen which can be essential for its video capabilities, especially when considering the abovementioned 4k video feature. The greatest leap forwards of this camera and the most noticeable one compared to the previous models of the line is its massively better battery life, as it can provide up to 1070 shots compared to 650 shots of the previous SL model, something that also raises its video duration capabilities before a recharge or a battery swap is needed. Other than these features, this model follows the tested and successful formula of the contemporary Canon cameras, having all the common characteristics, like Wi-Fi & Bluetooth connectivity, touchscreen and smartphone remote control.

Canon EOS SL3 can be a camera that will dominate the higher end of the budget DSLR market, due to the reasons stated above. It might not be the camera which is innovative and offers a drastic upgrade in the realm of budget photography, but it has an excellent versatility due to its video capabilities, that are perfectly suited for the constant rise of vlogging. At the same time, being robust, compact and really ergonomic, it is can be a good choice for a new, aspiring photographer.