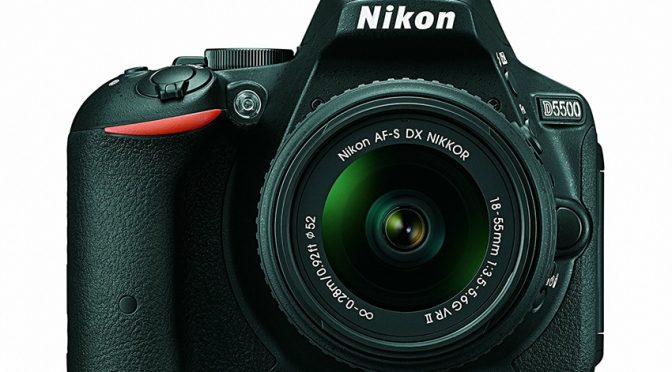 Any experienced photographer will at attest to one fact; it is not easy to find an entry level DSLR camera. To make it worse, the camera market is flooded with many cameras, and each of them claims to be the best. This will make your hunting mission to be quite a complex affair. If you are looking for a good DSLR camera that will give you the value of your money, try out Nikon D5500. The camera is at a higher level than its close competitors  which are at the same DSLR level. It has some powerful features that make it stands strong against other cameras from other brands that are at the same level as it.

As expected, Nikon D5500 came with new design and style which is quite different from its predecessor, Nikon D5300. Its size is smaller, and it also feels lighter. Its body weighs 420g which is 60g than its predecessor. Regarding size, the camera’s dimension is 124 × 97 × 70mm. The changes in the design also affected how the camera feels and how you can handle it. It has an intense grip which means that your hands will be more than comfortable handling the camera. The
curvature which is at the edge of the camera’s body provides a perfect point on which your fingers can rest on.

In constructing the D5500, Nikon dumped magnesium alloy and polycarbonate but instead went for carbon fire. This explains the change in how the camera feels. Despite the changes in how the camera feels, it retains the layout that was used in its predecessor (D5300). One manual dial button is at the top plate, and another one is on the back plate. The manual dial mode is backed up by PASM dial mode. In overall, the buttons are easily accessible and have been optimized to make the user comfortable.

One unique feature of Nikon D5500 is its DX sensor which has 24.2MP this value of megapixels is higher than any other entry-level
DSLR in the market. The camera’s performance and speed are under the control of Exceed 4 processor. It has an excellent AF

performance and can focus accurately even when there is minimum light. Nikon D5500 has a good metering performance thanks to a high-resolution meter sensor. However, it has lower ISOs which
leave more room for shadow.

If you are anticipating for high-quality photos, the D5500 will not fail you. The quality of the photos can be made better by adding
a more powerful lens. An ISO of between 1600 to 3200 can get rid of the shadow effect. The ISO sensitivity of the D5500 ranges between 100 and 25000 but don’t use extreme high ISO value. The camera can shoot video of up to 1080p though it does not have 4K video capture. Video shooting is further enhanced by a built-in stereo microphone though there is an additional port for an external microphone.

There is a very small difference between Nikon 5500 and  its predecessor Nikon 5300. However, the D5500 can deliver better performance, and it just feels good to handle it. When used with the high-quality lens, the camera will give you value for your money.